In the city and in the countryside as well, the boater is nowadays equated with the holidays. With a casual look, it'll know how to make your style go to the next level. Its braid or grosgrain gives a fancy touch to this natural straw finely woven. This way, your head will breathe while you'll be protected from the sun rays. Let's not forget in fact that the first mission of a hat is to protect our scalp from the sun attacks and specially from its UV rays.

The boater is a word that comes from "boat", which is the name of a small ship propelled with paddles and the suffix "er". It gets its name from the Spanish term "canoa" with itself gets its name from the Arawak of the Bahamas (an Amerindian language), which means "boat". Before being a hat, the boater is first a term that designates a sailor, member of the crew of a boat. In the same way as the gondolier, more sophisticated version with a long braid, it refers to the seaman who conducts a typical gondola in Venice.

For a long time headwear of the seamen, the boater was rapidly adopted by Parisians in the beginning of the 19th century thanks to the emergence of the pleasure crafts on the Seine. The fans of canoeing wear it in such a perfect way that it rapidly became fashionable, to the point that the children of the society wear it. Its very distinctive shape, its oval crown and flat brims give to the boater hat its own style which dandies will seize. They put it for multiple events: to perform a sport activity, on walks, or to participate in an open-air cafe. Therefore, whether it is for celebrating or relaxing, there're two ways to wear it: tipped over towards the front or tilted on a side.
Here you are now ready to get them hypnotized with your casual look.

The hat that inspires more important ones

Be it in painting, in songs, or in poetry, the boater hat unleashes passions. Let's take the example of the painting of Auguste Renoir, << Luncheon of the Boating Party >>. That work was realized between April and July 1881. This painting displays a relaxing and sharing moment on a terrace at the end of the 19th century. Despite its name, only the man at the bottom right is wearing a boater. Which doesn't prevent the artist from paying a tribute to the rowers through this painting.

In his turn, Guillaume Apollinaire chosed a calligram to express himself on this straw hat. Sent to Louise de Coligny-Châtillon, this poem which dates back from February 9th, 1915 displays a woman << under the big boater >>. And it's from 1920 that this accessory became a fashion accessory, an element that is an integrated part of a summer wardrobe. 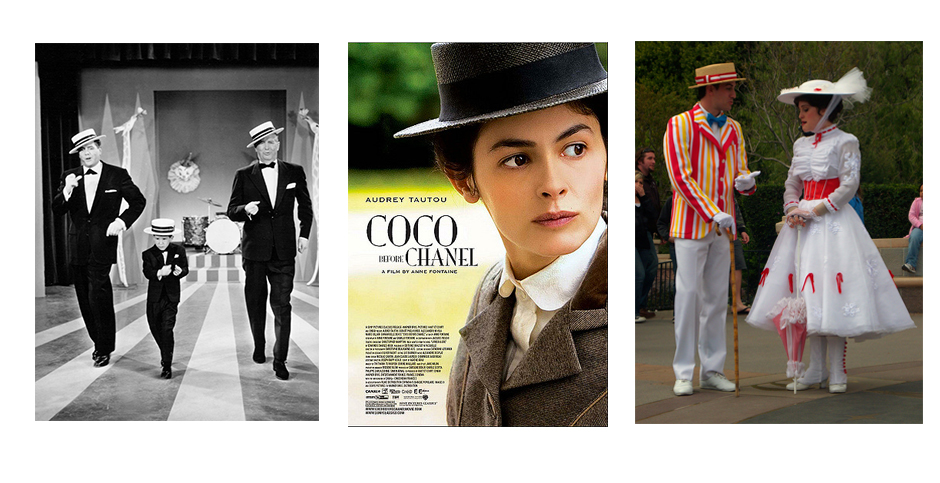 Fetish headwear of the stars of the 20th century


From Fred Astaire and Maurice Chevalier, music-hall artists, including Bert, the chimney sweep and friend of Mary Poppins, to Leonardo DiCaprio and Tobey Maguire in the film "Gatsby, the Magnificent",  all these men dared the boater hat and adopted it. It's true that this accessory was an item of clothing of male fashion in the beginning of its existence. However, it didn't take long to seduce women. Its most famous ambassador is still the renowned fashion designer and dressmaker Gabrielle Chanel. Her nonconformist spirit made her go against the flow by wearing a boater, simplistic straw hat, on the contrary to extravagant hats of that time.

From the walks by the water and the evenings in open-air cafes, the boater knew how to reinvent itself and to enter again the modern tastes. Combining well with jeans and a white t-shirt, or with a flowery dress, this headwear is the worthy representative of summer hats. Associated with a straw tote with pompoms and flip-flops, it will bring lightness and coolness to your outfit.

Small tip for fashionistas: play with colors and textures and match this hat with a solid-color combi-trousers to reveal your lenghtened and slim silhouette. For a 100% <<French touch >>, wear the boater with a striped jersey. Your allure will then recall the one of Parisians in the beginning of the 20th, with a modern touch.

Still hesitating? Profit from our selection of boaters and straw hats! They are of many types and with multiple prices! We're sure you'll meet the model you'll fall in love with. 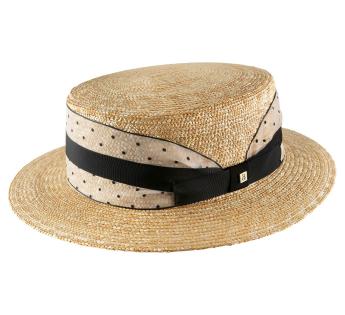 Couture Marcia
Made in France
Straw-braided in Italy
$ 92.50 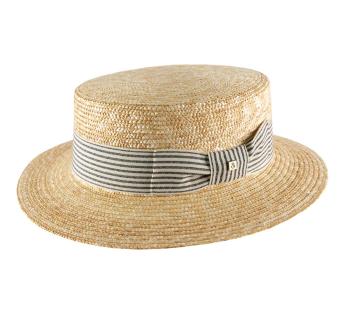 Couture Marin
Made in France
Straw-braided in Italy
$ 72.00 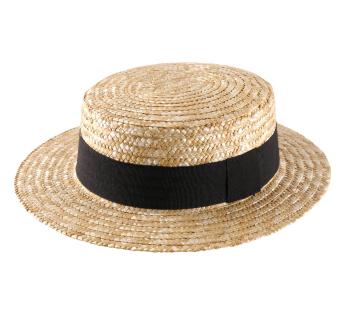 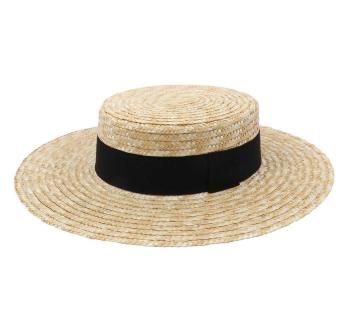 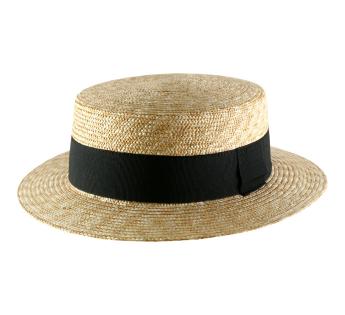 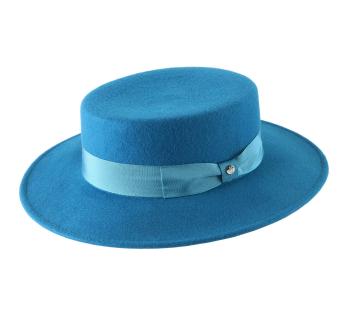 Couture Camille
Made in France
Origin of felt: Italy
$ 83.00 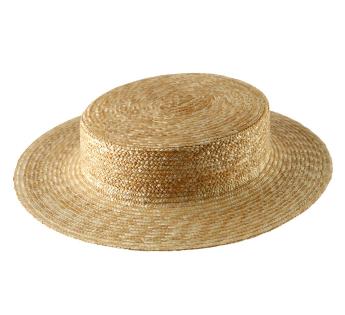 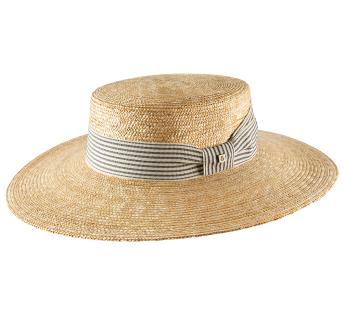 Couture Madeline
Made in France
Straw-braided in Italy
$ 78.50 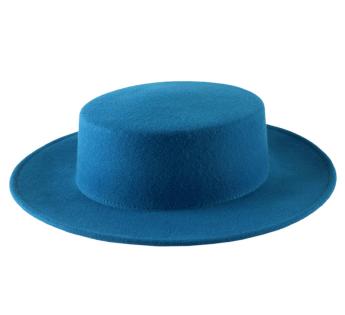 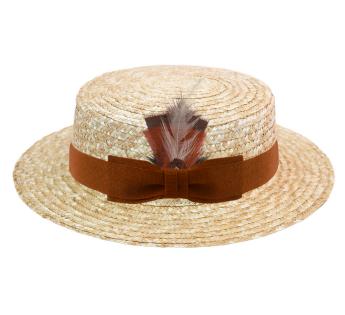 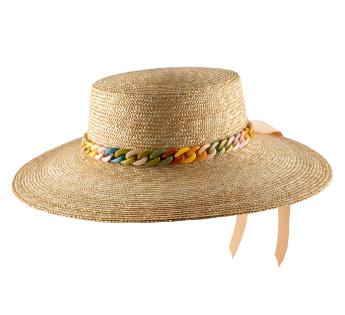 Couture Aliette
Made in France
Straw-braided in Italy
$ 78.50 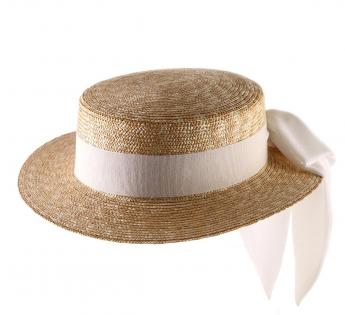 Couture Sophie
Made in France
Origin of straw: Italy
$ 92.50 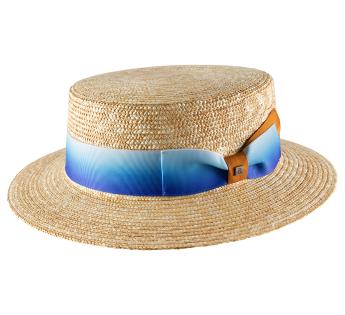 Couture Alix
Made in France
Straw-braided in Italy
$ 74.00 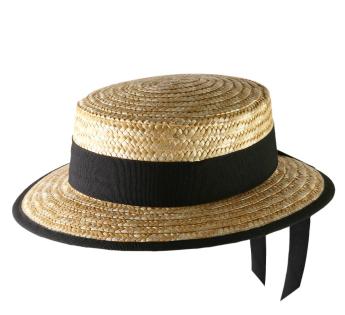 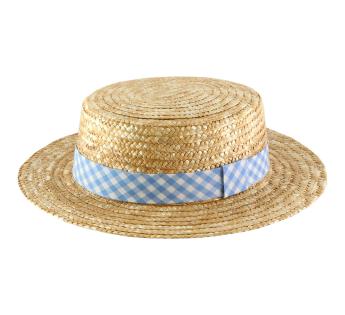